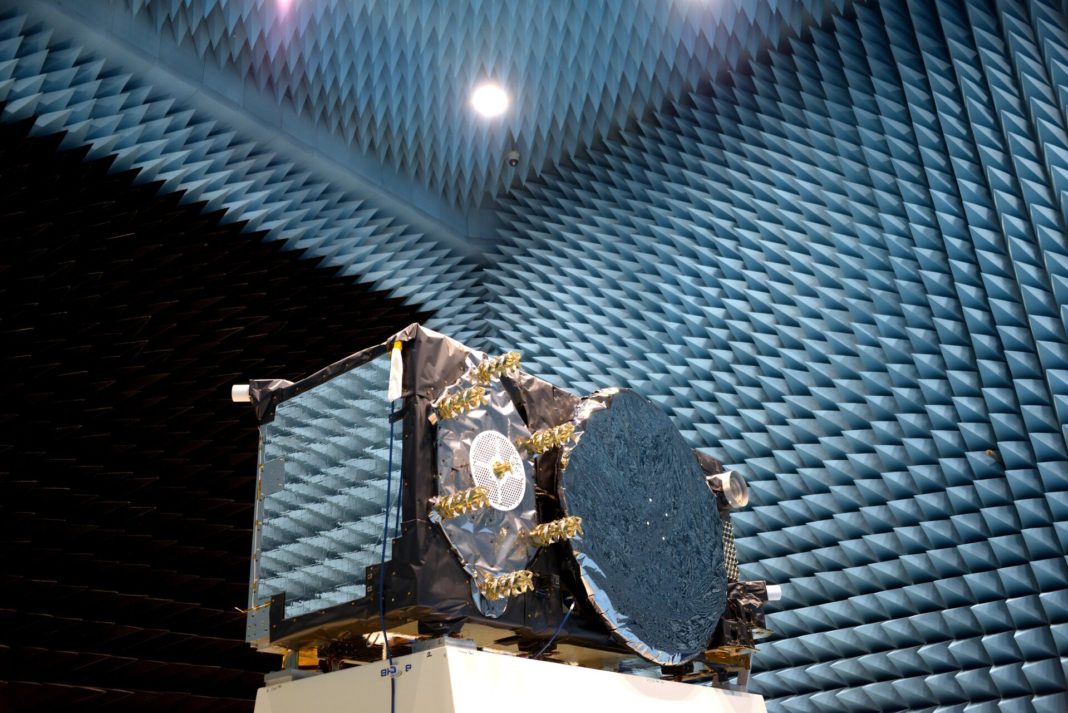 Europe’s Galileo satellite navigation system is providing the world’s most precise positioning services, but the satellites at its heart are surprisingly compact, and dependent on many different technologies to keep running. Here are 12 things you probably didn’t know about them:

1. Satellite Fiat Pandas: Despite their collective worldwide signal coverage, each individual Galileo satellite is relatively small. With core body dimensions of 2.5m  by 1.2 m by 1.1 m each satellite is comparable in size and shape to an old-fashioned UK telephone box. Galileo team members compare the satellites to “’Fiat Pandas’”, although with a launch mass of about 715 kg including propellant they are actually lighter than the smallest of Smart Cars.

2. Locked onto Earth: Each Galileo satellite is dominated by its main, 1.4-m-diameter L-band navigation antenna, which transmits navigation signals down to Earth. This antenna is kept permanently locked onto the Earth disc using infrared ‘Earth sensors’ – a pair of which are placed just above the antenna., These work by homing in on the contrast between the heat of Earth’s atmosphere and the cold of deep space.

3. Saving lives from space: Below the navigation antenna is a smaller hexagonal-shaped antenna incorporating six protruding elements. This is Galileo’s Search and Rescue antenna – part of the international Cospas-Sarsat programme. It picks up SOS signals from emergency beacons down on the ground and relays them on to a ground station for forwarding to local emergency services – contributing to the saving of more than 2000 lives annually. Galileo’s Search and Rescue payload can detect activated beacons in less than five minutes, pinning down their location to within one or two kilometres, additionally performing ‘return link’ messaging – replying to the beacon to inform those in peril that help is on the way.

4. Thrusters on top: Despite operating in space, Galileo has a definite ‘up and down’ orientation relative to Earth. At the top of the satellite along each corner are a pair of thrusters, fuelled by hydrazine from a central tank. These thrusters are used to gradually move the satellite into its final set orbit following its deployment from the launcher upper stage and to perform orbital manoeuvres. Also used to adjust satellite pointing direction are reaction wheels – set spinning to make the satellite rotate in the opposing direction – and ‘magnetotorquers’ whose internal electromagnets adjusted to cause a positive or negative reaction against Earth’s magnetic field.

5. Clocks on the shady side: Meanwhile the base of the satellite – covered with reflective panels – is intended to be always kept out of sunlight and in shadow. On the inside of this panel is where Galileo’s four clocks are mounted. The aim to keep their operating temperatures stable to within 0.5 °C, to a maximum 20°C, when the difference between the sunny and shaded side of the satellite surface is more than 200°C. The latest ‘Batch 3’ Galileo atomic clocks are protected with an additional radiation shielding on the satellite to further boost their stability.

6. Timekeeping to a few billionths of a second: Twin ‘passive hydrogen maser’ atomic clocks are the master clocks onboard, using the ultra-stable oscillations of a hydrogen atom to measure time to an accuracy of one second in three billion years. Two smaller rubidium clocks provide an independent time source, accurate to three seconds in one billion years. In practice an ensemble of atomic clocks on the ground keep these orbital clocks synched to ‘Galileo System Time’, accurate to a few billionths of a second, via timing corrections included in the navigation messages sent up to satellites by Galileo’s worldwide ground segment.

7. Keeping in touch: On opposing top and bottom corners of the satellite what resemble squat batons project out into space – these are the twin ‘S-band’ antennas, which return ‘housekeeping’ telemetry data to mission control on Earth and pick up telecommands in turn to operate the satellite platform and payload – as well as performing the ranging used to estimate the satellite’s position in space.

8. Corrections from Earth: The remaining antenna is a small disc to the top right of the navigation antenna: this is the C-band antenna that receives navigation messages from the ground. Typically updated once every 45 minutes, these messages are crucial to maintaining Galileo’s accuracy. They incorporate corrections to any errors in the onboard atomic clocks or orbital changes of the satellites, as well as information on any satellites temporarily going out of service, to be retransmitted to user receivers within Galileo signals.

9. A question of time: Why the need for these ongoing corrections? Satellite navigation relies on measuring the time taken for signals from space to reach the receiver on the surface – a minimum of four signals are needed to pinpoint a positon on the ground – but to maintain accuracy the timing must be accurate to a few billionths of a second. A single billionth of a second out equals 30 cm of positioning error. A second’s error would mean the receiver might as well be on the Moon. Similarly, any slight shift in the satellite’s orbital position also changes the signal travel time, the basis for the all-important ranging calculation.

10. Laser target: What looks like another rectangular antenna at the top of the Galileo satellite is actually a laser retroreflector. Once or twice a year, a laser beam is shone up each satellite by the international Laser Ranging Service – maintaining a map of laser stations around the globe – to deliver a ranging accuracy down to under a centimetre, significantly better than the half metre or so precision of S-band radio ranging.

11. Signal generation: Some of the most important Galileo systems are based within the satellite body. The Clock Monitoring and Control Unit assigns the master clock and active spare from the four clocks aboard, making sure their timings are in phase so the spare can take over immediately if needed. This unit works in conjunction with the Navigation Signal Generator Unit, taking the updated navigation message from the C-band antenna to generate an L-band navigation signal for transmission Earthward.

12. Powered by the Sun: All this functionality is powered by twin 1 x 5-m-long solar wings, supplying about 1.9 kilowatts of power – about the same as an average European household’s consumption. Mounted onto these panels are more than 2500 state-of-the-art gallium arsenide solar cells, ‘triple junction’ in design – meaning they are composed of three successive layers optimised for different frequencies of sunlight. On top of the solar cells is another protective glass layer, otherwise the cells would be eaten away by the space environment in a matter of months. Two ‘Solar array drive mechanisms’ slowly rotate the solar wings to keep them pointed Sunward at all times, steered using the satellite’s Sun sensors.