Geomagnetic Observations at Syowa Station in the Antarctic

The ArcGIS Pro book on the use of the ArcGIS Pro application developed by ESRI has been updated for the latest version 2.8. This fourth...
Read more
UAV & DRONES

NAVAID Calibration Drone by Cursir helped to speed up the flight check of the landing system of the Ulyanovsk airport. Last year, by order of...
Read more

Solar activities, such as CME(Coronal Mass Ejection), cause geomagnetic storms that are a temporary disturbance of the Earth’s magnetosphere. Geomagnetic storms can affect GPS positioning, radio communication, and power transmission system.

Solar explosions also emit radiation, which can affect satellite failures, radiation exposure to aircraft crew, and space activity. Therefore, it is important to understand space weather phenomena and their impact on the Earth.

Space weather research by continuous observation of cosmic rays on the ground is mainly conducted using observation data from neutron monitors and multi-directional muon detectors. Since the phenomenon of space weather is on a short-term, days-long scale, it is effective to investigate changes in the flow of cosmic rays for several hours, which requires a total sky monitor of cosmic rays.

The earth’s atmosphere is daily being bombarded by Cosmic Rays, consisting of high-energy particles that travel from the sun or more distant places in the universe. The hits create showers of secondary particles, muons for example, that we can detect with our muon detector!

In the polar regions, unlike low latitude regions on the earth, it is possible to observe cosmic rays coming from the same direction with a neutron monitor and a muon detector due to the weaker deflection by the geomagnetism. This is the reason why Syowa Station was selected as the observation point.

Syowa muon detector and neutron monitor observed small fluctuation in CR count like a Forbush decrease on 2018.8. The research group including researchers from Shinshu University and the National Polar Research Institute found curious cosmic-ray density variation on this event by analyzing GMDN data.

On the CME event, a huge amount of coronal material released with a bundle of the solar magnetic field, called Magnetic Flux Rope (MFR), into the interplanetary space. MFR moves through interplanetary space as expanding. CR density is low inside of it because it is originally coronal material. When the Earth enters the MFR, CR counts on the ground decreases. This is called Forbush Decrease.

This event attracts interest from researchers because,

By analysis of the GMDN and solar plasma data, it is concluded that the high-speed solar wind causes the unusual enhancement of the CR density by compressing the rear part of the MFR locally.

Cosmic ray observation data is closely related not only to space weather research but also to atmospheric phenomena such as sudden stratospheric temperature rise and is expected to be used in a wide range of fields in the future.

Accurate and reliable positioning, timing and navigation (PNT) technologies, such as GNSS technologies have become “invisible utilities” that enable many critical applications, including the electric...
Read more
GNSS & POSITIONING 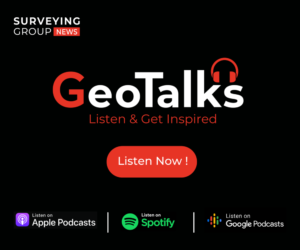 The ArcGIS Pro book on the use of the ArcGIS Pro application developed by ESRI has been updated for the latest version 2.8. This fourth...
Read more
UAV & DRONES

NAVAID Calibration Drone by Cursir helped to speed up the flight check of the landing system of the Ulyanovsk airport. Last year, by order of...
Read more
GIS & BIG DATA

5 Ways to Use GIS in Smart City Projects

The successful implementation of a smart city project requires the development of a digital system that can manage and visualise the geospatial data in...
Read more

Ford is going to employ two of Boston Dynamics’ “Spot” robots, which are four-legged, dog-like walking robots that weigh roughly 70 lbs each, to...
Read more