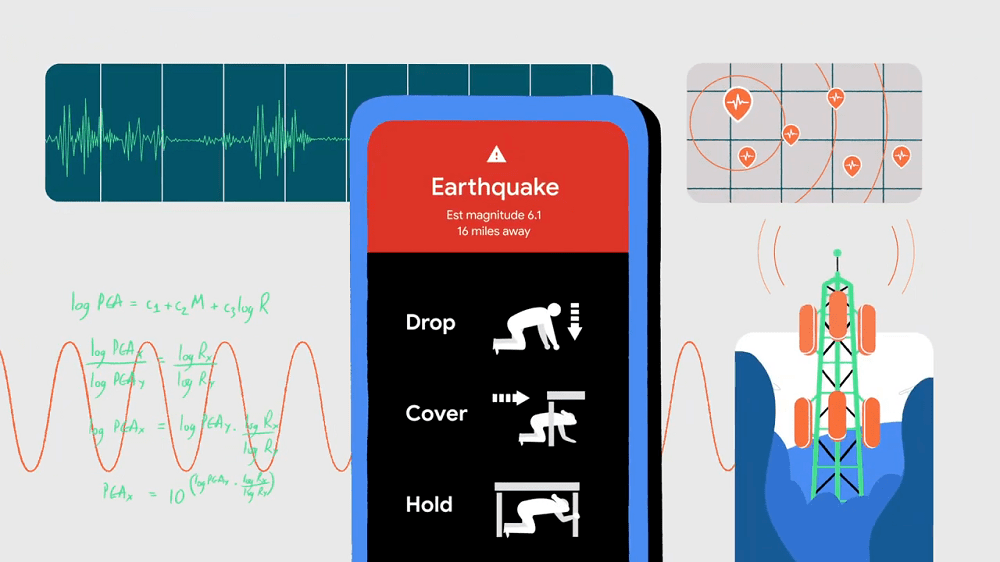 Earthquakes happen daily around the world, with hundreds of millions of people living in earthquake-prone regions. An early warning can help people prepare for shaking, but the public infrastructure to detect and alert everyone about an earthquake is costly to build and deploy. Now Google uses Android to provide people with timely, helpful earthquake information when they search, as well as a few seconds warning to get themselves and their loved ones to safety if needed.

Google collaborated with the United States Geological Survey (USGS) and California Governor’s Office of Emergency Services (Cal OES) to send earthquake alerts, powered by ShakeAlert®, directly to Android devices in California. A few seconds of warning can make a difference in giving you time to drop, cover, and hold on before the shaking arrives.

Installing a ground network of seismometers, as California has done, may not be feasible in all impacted areas around the world. So, the reach of Android’s platform to help detect earthquakes is used.

All smartphones come with tiny accelerometers that can sense signals that indicate an earthquake might be happening. If the phone detects something that it thinks may be an earthquake, it sends a signal to our earthquake detection server, along with a coarse location of where the shaking occurred. The server then combines information from many phones to figure out if an earthquake is happening.

To start, this technology will be used to share a fast, accurate view of the impacted area on Google Search. When you look up “earthquake” or “earthquake near me,” you’ll find relevant results for your area, along with helpful resources on what to do after an earthquake.

Over the coming year, you can expect to see the earthquake alerts coming to more states and countries using Android’s phone-based earthquake detection.