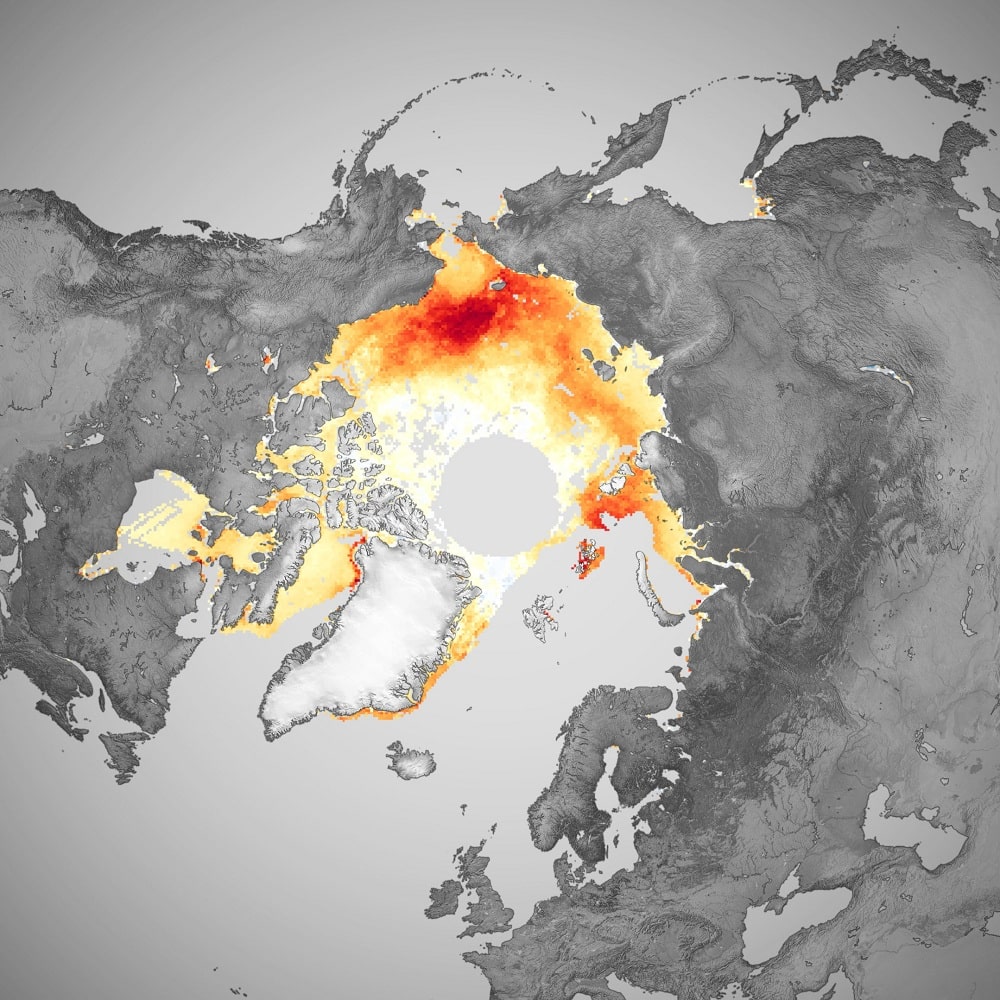 Throughout 2020, the Arctic Ocean and surrounding seas endured several notable weather/ climate events. In spring, a persistent heatwave over Siberia provoked the rapid melting of sea ice in the East Siberian and Laptev Seas. By the end of summer, Arctic Ocean ice cover melted back to the second-lowest minimum extent on record. In autumn, the annual freeze-up of sea ice got off to a late and sluggish start.

But any single month, season, or even year, is just a snapshot in time. The long view is more telling, and it is troubling.

Forty years of satellite data show that 2020 was just the latest in a decades-long decline of Arctic sea ice. In a review of scientific literature, polar scientists Julienne Stroeve and Dirk Notz outlined some of these changes: In addition to shrinking ice cover, melting seasons are getting longer and sea ice is losing its longevity.

The longer melting seasons are the result of increasingly earlier starts to spring melting and ever-later starts to freeze-up in autumn. The map above shows trends in the onset of freeze-up from 1979 through 2019. Averaged across the entire Arctic Ocean, freeze-up is happening about a week later per decade. That equates to nearly one month later since the start of the satellite record in 1979.

The change is part of a cycle called the “ice-albedo feedback.” Open ocean water absorbs 90 percent of the Sun’s energy that falls on it; bright sea ice reflects 80 percent of it. With greater areas of the Arctic Ocean exposed to solar energy early in the season, more heat can be absorbed—a pattern that reinforces melting. Until that heat escapes into the atmosphere, sea ice cannot regrow.

The chart above demonstrates another way the Arctic is changing: the average age of sea ice is becoming younger. At the start of the satellite record, much of the ice covering the Arctic Ocean was greater than four years old. Today, most of the ice covering the Arctic Ocean is “first-year ice” —ice that forms in winter and does not survive a single summer melt season. (After sea ice reaches its minimum extent each September, the remaining ice graduates to second-year status.)

Dominated by thin first-year ice, along with some older ice thinned by warm ocean water, the Arctic sea ice pack is becoming more fragile. In summer 2020, ships easily navigated the Northern Sea Route in ice-free waters and even made it to the North Pole without much resistance.

Fortunately, summers are still not entirely ice-free. “We’ve been hovering for some time around 4 million square kilometers of Arctic sea ice each summer,” said Stroeve, a researcher at the University of Manitoba. She added that she intends to examine which conditions and processes could push sea ice to the next “precipitous drop”—when the extent of summer ice cover drops to a new benchmark of 3 million square kilometers.